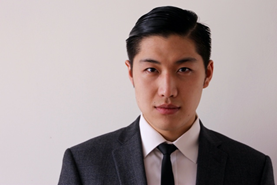 I was born and raised in an immigrant family. By second grade I had completed more formal schooling than my father, and instinctively became a translator and interpreter between Chinese and American cultures. For as far back as I remember, I have enjoyed building bridges and understanding between people.

I studied historiography in college because I was interested in who gets to decide which aspects of history are remembered. I was shaped by those studies to prioritize the importance of context in understanding social phenomenon.

As the former Executive Director of Libraries Without Borders, a non-profit where I am now a board member, I have worked to expand educational opportunities to under-served areas, including refugee camps in Jordan, demobilization zones in Colombia, and laundromat waiting areas in the US. Libraries Without Borders received a grant from the DC Rotary Club in 2018, which inspired me to learn more about the club's initiatives and to join as a member in 2019.

Though I had planned to live in Germany for most of 2020, I decided to return to DC early as COVID-19 began to spread. I felt an urgency to be home working on initiatives in my own community to respond to the pandemic and its rippling consequences.

I'm currently a visiting researcher at UNESCO's Institute for Lifelong Learning, and a Robert Bosch Stiftung Fellow at the Global Public Policy Institute, a think tank. I am also on advisory boards at the Library of Congress, the Future Society (a think-tank), and EveryLibrary (an advocacy group).

I'm an alumnus of Harvard, Oxford, Tufts, and the National Taiwan University, and now pursuing a PhD in sociology. I grew up speaking Chinese Mandarin, and study French and German for fun. I've run marathons in Boston, Tokyo, and Taipei, and was formerly a competitive figure skater and pianist.