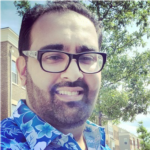 Sergeant-at-Arms Bob Schott presented the Rotary four-way test and then announced birthdays for the week.

President Riker provided a club update. We celebrated our club’s 108th birthday with a candle and cake. She mentioned our active club presence on Facebook.

Shelly Williams talked about the ongoing volunteer opportunity with Walter Reed Bingo, which is now being held via Zoom on the third Thursday of every month. Reach out to him for details.

Next, we connected during a seven-minute small fellowship breakout session.

Linda Solomon introduced our speaker, Naumaan Hamid, Restaurateur, Activist, and Past President of the College Park Rotary Club. He – along with several others – shared the depth and breadth of our club's involvement and District 7620's ongoing COVID-19 Emergency Response.

Mr. Hamid, a New York Native, received his bachelor’s in hospitality management from Johnson & Wales University in Providence, Rhode Island. He eventually settled in Maryland, where he opened his first restaurant, Krazi Kebob, off the University of Maryland campus in 2010.

Mr. Hamid descends from a long line of chefs and restaurateurs, so naturally his love for food flows through his veins. This passion is what fueled his decision to follow in his family’s footsteps. Mr. Hamid considers food an opportunity to spread happiness and is a firm believer of the saying that the way to a person’s heart is through their stomach.

In addition to being an entrepreneur, Mr. Hamid advocates the importance of community service and giving back. He spends most of his time outside of work dedicated to nonprofit work. Even while at work, he tries to find any opportunity to incorporate his passion for community service. While growing up, Mr. Hamid was blessed to be surrounded by amazing mentors and role models that he remains forever grateful to. Because of these wonderful influences in his life, he strives to provide the same mentorship to the youth that he was given. Mr. Hamid’s aim in whatever he does, whether business or personal, is to incorporate his passion for community service. He hires local community kids so he can not only help them by providing employment, but so that he can be a mentor for them as well.

Currently, he is serving as immediate past president of the Rotary Club of College Park, Charitable Funds Chair for RCCP, Chair of District 7620 COVID-19 Task Force, & District 7620 Rotary Advocate. Mr. Hamid believes that with each new day, there is a new opportunity to help make a difference.