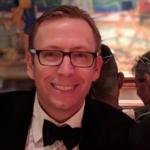 Named one of the Top 50 Nonprofit CEOs in the U.S. by the Nonprofit Times in 2016 and 2017, Scott Beale is the Founder and CEO of Atlas Corps, a leadership development program for the world’s best social change professionals. Sometimes called a “reverse Peace Corps,” Atlas Corps brings leaders from around the world to serve in the U.S., Colombia and Australia. Over 12 years, Atlas Corps has supported over 700 leaders from 94 countries who have served at many of the world’s best organizations in the U.S., Colombia and Australia, such as American Express, Ashoka, Grameen Foundation, McKinsey, UNICEF, and the U.S. Peace Corps.

Prior to launching Atlas Corps, Mr. Beale worked in the White House, at Ashoka and with the U.S. Department of State. He is the author of the first book on the politics of the Millennial Generation (Millennial Manifesto: A Youth Activist handbook) and back when he was young the Youth Vote Coalition named Scott one of 30 people under 30 changing politics in America. Among Mr. Beale numerous accolades include being named one of the top three nonprofit CEOs in Washington, DC; “The Nonprofit Entrepreneur” by the Washington Post; and the National Award for Citizen Diplomacy. Mr. Beale has a Bachelor’s degree from Georgetown University and a Master’s in Public Administration (MPA) from the University of Delaware. He is an alum of the Presidential Leadership Scholars Program and an Adjunct Professor of Leadership at Georgetown University and the University of Virginia. He serves on the Board of AIESEC USA. He currently splits time between Mexico and the U.S. and has lived in eight different countries (Bosnia, Colombia, Cuba, France, India, Mexico, Pakistan, and the U.S.).